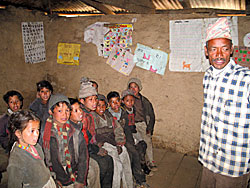 Because of the use of firewood and pine resin for feeble lamps that are used for domestic lighting, the indoor smoke causes acute respiratory ailments, a major killer of children in the district which has the highest child mortality rate in the country.

The idea of the Campaign was that solar-powered light could be a means to liberate the people of Humla from those problems, protect the environment and create new opportunities for education and employment.

The Campaign’s strategy was to exhort one Nepali who enjoys the benefits of modern electricity to support another who is living in darkness.