Unlike the usual practice of cutting a ribbon and inaugurating a new office, Rana, instead, embraced a committed social worker, Birkha Bahadur Rokaya, from a remote village of Murma in Mugu district to symbolise the core value of HeNN – connecting the relatively rich with the extremely poor.

The Chairman of Tara Management Pvt Ltd, Siddhartha Rana, had donated earlier in the year US$1,30,000 (Rs 10 million) to HeNN’s Administrative Endowment Fund.

Unlike various international charities, HELP NEPAL Network has a unique policy of not using a single penny from the charitable donations on administrative purposes.

The rental, staff and other costs of the newly established office is borne by the interests generated from the Administrative Endowment Fund.

Prior to the establishment of new secretariat, HeNN was operating from a small room, provided free of cost by a HeNN executive member, at Chabahil.

The inauguration function at Chuchchepati was attended by some HeNN executive members, well-wishers, some journalists and the publisher and former editor of Nepali Times, Kunda Dixit.

Dixit has decided to unconditionally support and promote the activities of HeNN from the 31 December issue of the Nepali Times.

On the same occassion, HeNN also handed over checks of NRs 450,000 each to Mankot Lower Secondrary School of Bajura district and Thokarpa Secondary School of Sindhupalchowk district. Similarly a cheque of NRs 300,000 was handed over to Mugu Primary School of Morang district.

All of the money was raised by a London based group of Nepal lover youths, who have been raising funds for HeNN since 2008 by running London Marathon.

They have formed a group, Run For Change, whose members “intend to collaborate to support communities in Nepal to achieve much needed change.” 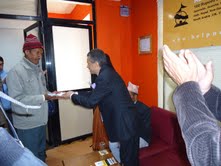 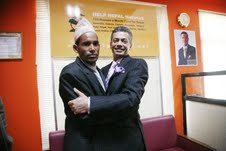