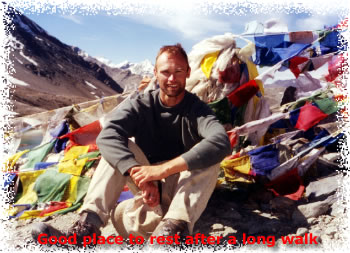 Stephen Watkins has now walked almost 2000km across India to raise funds for a health post in the remote Mugu district of Nepal. He had to stop short of the Nepal border as walking alone was not safe at present. He hopes to return another day to continue with his adventure.

This is what he had to say upon his return:

“I am now back in the UK after deciding to end my walk at Kathgodam in north India because of the increasing problem of insurgency on both sides of the Indo-Nepal border. I was disappointed not to have reached Nepal , which lay less than 100km to the east, but was satisfied that the trip had at least fulfilled some personal ambitions. I would like to tale the opportunity to wish the Help Nepal Network all the best in their work and hope the problems in Nepal are resolved quickly and peacefully for the benefit of everyone living there.”

Please write to admin@helpnepal.net if want to make a donation. All money raised will be spent on the health post .

You can donate online through Givenow.org.

Below is what Stephen had to say before he left for his big walk !

I guess the obvious question you’ll ask is why undertake such a long and arduous walk for any reason other than to raise funds for charity?

Well, I have been thinking about a ’long walk’ for a number of years both as a physical challenge and an adventure to satisfy the not-so-young Indiana Jones in me.

A previous attempt ended after three weeks when I was mistakenly ‘detained’ by the Indian Army on suspicion of being first a spy, then an escaped prisoner, while trekking in Ladakh.

I was later told my detention was more for my protection from the group of drunken and highly excitable villagers who’d first reported me as any perceived threat to national security.

This will be my seventh visit to India and I have been preparing as best I can given the distinctly flat and un-exotic landscape of east London where I live and work as a freelance press officer.

I won’t pretend that I’m not nervous about the trip but I’m also excited at the prospect of an adventure that will take me on a 3,000km journey from my starting point in Ladakh.

I will then travel south through the Himalayan foothills before crossing into Nepal and following the Terai to the country’s eastern most border.

My grandparents lived on the Indian sub-continent for many years and, before my first visit as a fresh-faced student in 1987, warned me ‘it was a country that will get into your blood.’ How right they were.

Anyone interested in charting my progress can periodically check on the website or email me direct on the.bigwalk@virgin.net

Finally, I would appreciate any donation you can make on behalf of the Mugu health post over the coming months.

It will give thousands of villagers access to basic health care that most of us take for granted as well as act as a personal incentive to keep me going when mind and knees start to wobble.