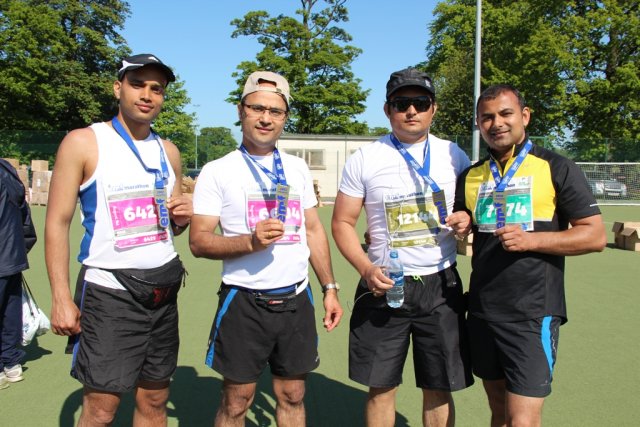 A chemistry researcher at the University of Aberdeen, Mr. Regmi has already participated in numerous charitable races in Scotland. But this was his first marathon.

Dr. Paudyal also works at the University of Aberdeen. He believes that running for charitable purpose is the best way to not only look after your own health but also care about others.

A researcher on the efficacy of yoga in cardiac health, Mr. Marahatta also shares similar passion. He runs for mental and physical wellbeing. He hopes to spread smiles to the people of Mugu, all the way from Scotland.

Mr. Chhetri, a writer, believes in having positive frame of mind. It is for health and happiness that he runs.

Together they want to inspire fellow Nepalis. They have expressed their desire to run for more such charities in future.

The fund raised during the Edinburgh marathon was handed over to the HELP NEPAL Network – UK.

The Edinburgh Marathon is renowned as one of the world’s oldest marathons.

The event was telecast by major media including BBC and prominent papers.