Rs 2.5m Handed Over to Six Projects By MaHa 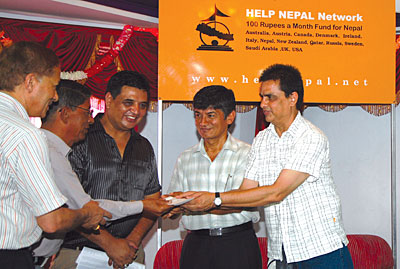 Rs 2.5m Handed Over to Six Projects By MaHa

Nearly Rs 2.5 million raised by the Help Nepal Network (HeNN) from Nepalis in 14 countries around the world were given out at a ceremony on Tuesday to fund education and health programs in Nepal.

The money was donated through a project called ‘Rs100 a Month Fund for Nepal’ in which Nepalis all over the world forego a bottle of beer or plate of momo a month, and donate it to the network. Money collected has been spent on nearly 100 projects in health, education and disaster mitigation in the past ten years. The 100 Rupees a Month Fund also supports e-libraries, infrastructure for schools and health posts, and uses money donated by Nepalis from Austria, Canada, Denmark, Ireland, Italy, Russia, Qatar, Saudi Arabia and New Zealand.

Among the latest beneficiaries handed cheques on Monday were a school in Parbat that got nearly Rs 600,000 to build a library, a health post in Dhanusha, a project to train community school teachers in Kavre, help to buy science lab equipment for a school in Ramechhap, a water project in Dhulikhel and over Rs 1 lakhs to buy classroom furniture for a community school in Sankhu.

HeNN’s Rabindra Mishra calls this “practical philanthropy” because it aims to collect small amounts of money from a large amount of people to make a difference. “We encourage Nepalis and those who love Nepal around the world to help Nepalis with health and education in rural Nepal,” Mishra says.

Also present on the occasion was Rameswore Khanal, HeNN executive member and the former finance secretary, who resigned earlier this year after his new minister refused to go after those accused in a fake VAT bill scam. Khanal said Nepalis shouldn’t wait for political stability in Nepal to help or invest in the country: “If we wait for stability we may be waiting for a long time, and many of our problems can’t wait.” 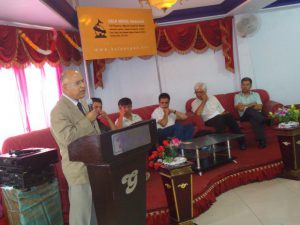 Khanal added: “Ghettoised affluence is inherently unstable, and will ultimately threaten those who are better off. You are not just helping long-term stability by helping the disadvantaged, but you also gain a lot of personal satisfaction for having helped the needy.”

HeNN doesn’t use any of the money donated from the 100 Rupees Fund for overheads and administrative costs. That is all paid from a trust fund of more than Rs 10 million donated by Siddartha Rana. The new three-person office in Chabel runs on the interest of the trust fund.

“Why complain that the government is doing nothing? Little things that we can do ourselves can bring great changes,” says Mishra. A group of second generation Nepalis in London raised Rs 1.2 million running a marathon this year and the money funded a school upgrade project in Bajura, Sindhupalchok and Morang.

HeNN keeps careful records of all its projects and provides detailed accounts of where the money goes. Donors are kept updated about where and how their contributions are being used. Says Mishra: “Not everyone can be a social worker. What we are trying to say is you won’t miss that extra beer or momo, but it will make a big difference back home. A little can add up to a lot.”

Nepali Times is proud to be a part of the Help Nepal Network, and urges its readers in Nepal and abroad to support its activities across the country. www.helpnepal.com