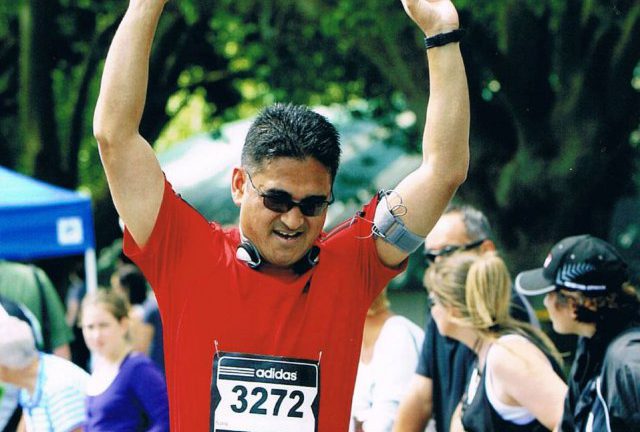 Marathon With a Cause

We come across only a few opportunities in life to make a real difference in our own and others’ lives. Most of the times we fall short to notice such chances. At others, these opportunities slip away because we are too busy with life. Taking a step back and reflecting on our actions may allow us to identify such occasions and to celebrate them.

Early this year I asked myself three simple questions – “What am I doing? What have I become? Where am I going?” After a lot of soul searching I figured out I had so far been extremely busy chasing my own dreams. The realisation of this narcissism struck me with a very bad sense of self-inadequacy. I had to find the cure to this newly diagnosed ailment that was feeding on my sanity inside out.
The salvation came through an unusual source – running. Early this year I decided to run in Auckland Marathon in October. However, something was still missing from the equation as I was once again chasing something to satisfy myself. The puzzle fell into the right places only when I realised the opportunity to contribute to the noble work of HELP NEPAL Network. Never in my imaginations had it occurred me that the combination of running and charity would take me to such a wonderful journey. Impression of which, I am sure, will last long.

Fascinating things happened during the past seven months only because some outstanding people came on board this voyage. Raising fund for HELP NEPAL Network gave me so much more than I did for it. I re-connected with friends and families I have lost contact for a long time. It introduced me to many wonderful people otherwise I would have not known. The humility to witness the big heart of so many individuals was humbling beyond comprehension. These wonderful people not only financially contributed to the charity but also made the whole experience richer with their generosity, kindness and compassion.
Without much experience about working for charities, the fund-raising task was challenging. This part of the campaign started one morning in the April when I tinkered with the Google Sites to set up a website. After spending good 6 hours the website was up and running ready to collect donations from anywhere from the world. One of the hardest parts was asking for financial commitment when I was not giving anything in return. The generosity of so many people proves that it was, however, not an issue for many. Many donors told me that they were glad to be part of a good cause such as supporting HELP NEPAL Network. So far the donations from this campaign has reached about one hundred thousand Nepali Rupees.

Looking back to this campaign, I am glad that I did things differently this time. I did something more than merely indulging in satisfying my ego. It is humbling to realise that the donations will be used for some noble deed such as fixing a roof of a classroom, buying books for a school or running an eye-camp in a remote village. I am grateful for the opportunity this campaign provided me to be a bridge to connect those needing help and the ones willing to offer them.

The Bumpy Road to Starting Line

The race and the seven months leading to it several times tested me both physically and mentally. Being my first marathon and an amateur runner, I had two simple goals. Firstly to get to the starting line fit and healthy, and secondly to complete the event.
Both of the above goals were achieved. As expected they, of course, involved many challenges. The biggest test of my resilience occurred about seven weeks from the race day. Mid September a nasty flu and subsequent complications soon developed into a full blown acute bronchitis. I not only coughed until the ribs were soar but the fever and fatigue also forced me to halt weeks of crucial training sessions.

We do not know our strengths until we push the boundaries. An endurance event such as a marathon is equally a mental challenge as much as it is a test of our running abilities. The spirit of endurance sports, like the marathon, is in trying to achieve what is normally impossible and pushing our boundaries. The following from the website of Auckland Marathon nicely sums it up – “We get few opportunities in our lives to really push ourselves … where we challenge ourselves physically, mentally and emotionally. A running event or race is not a sport that most of us enter to win. It’s an experience we commit to so we can push ourselves beyond our normal boundaries.”

My doctor ruled out any possibility of my running the marathon. According to him, if I stressed my body chances of reoccurrence of the virus or even developing pneumonia was high. This news was shattering. I was disappointed with the prospect of not being able to run the race. I did not loose hope, however. Neither did I sit back and give up. I was eagerly waiting to get better to run again. I was aware that running too soon might further complicate my illness. With a great dilemma, after only a few weeks from the infection, I ran a half marathon on 9th of October, still sniffing and coughing. The result of this race proved to be the game changer. The course time was faster than I had anticipated. It was the much needed confidence booster that on the race day few weeks later I could attempt to run twice the distance.

October 30, race day, I got up before 4AM and headed towards the starting line.

The race started at 6AM. As the course unfolded a series of events tested me once again both physically and mentally. I was doing well until 21km. The remaining half of the course was flat but the difficulty after each km climbed sharply. The race stat says it all – it took me 30 minutes more to complete the second half. At 25 km my legs started to show signs of tiredness. At 30km, it got very difficult. At 35km, I was shattered and it seemed impossible to complete the course. When exhausted, even the simplest bodily tasks become the hardest. My only job was to lift a feet and put it in front of the other. However, after 35km of running that simple humanly task turned to be the toughest. At this point of the course, it was more a mental battle rather than the physical challenge of taking that next step. I somehow managed to win the mental battle as I chased the 40 km milestone. At 40 km my mind decided to step aside and allow me to draw from the sap left in my system. I started to pick up the pace.
My brain would, however, try to knock me off one more time. It threw the last dice almost at the end of the course at 41Km. I felt a twitch on my left calf. It was an alarm that it was time for a cramp. Things almost came to a grinding halt. I said to myself, “not now! Not now, please!!” The sight of landing hard on the road due to the cramp, less than1km from the finish line, was unfolding in front of me like a movie. To my great relief that scene didn’t occur in real life. It was so close to hallucination. Instead, my head listened to my command. I still can’t believe what happened there then at that instant. Simply amazing! Unbelievable. After this pact between my mind and body I then saw people. Many. Cheering, clapping and encouraging. With the finish line at sight I gave it all to propel myself as hard as I could towards the final gate. The last dash towards glory was full of the sweet taste of victory after the painful hours of hard work.

I lifted my hand and looked to the sky as I crossed the finish line, and got qualified to join the Marathon Club.

Lastly, the three questions I asked in the beginning. What am I doing? – I am doing things differently now. What have I become? – I have now realised pursuing selfish agenda alone is pathological; it is a bottomless crevasse. Where am I going? – This is only a beginning; I am now encouraged to run farther; more importantly – to be useful to the humanity – to make a difference.

I am indebted to HELP NEPAL Network for providing me the platform to organise this campaign. I am grateful to all the donors who opened their heart and wallet for my plea. I would not have completed the marathon without the valuable guidance from many experienced runners.

Last but not least, this campaign would not have seen the light of the day had it not been for the love and strength I drew from my young family. My wife completed the last paper of her post-grad on Saturday; the race was on Sunday. We both work full time and are parents to a beautiful 18 months toddler, Riya. This campaign is for my daughter. One day she will look back at this journey and say, “I am proud of him. He is my father”.