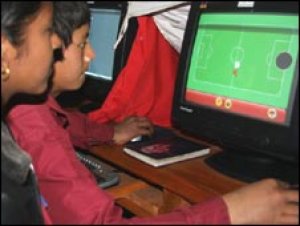 Kamal Prasad Sharma, aged 12, a student at Saraswati Secondary School in a small village not far from Kathmandu, was afraid when he saw a computer for the first time.

He didn’t dare enter the room, thinking the computer would harm him.

“I was really scared when I saw the computer,” he says.

“I didn’t go near it. I was worried it might explode and kill me.

“It was only when the teacher called me saying it was harmless that I went into the room, but I still hesitated.”

Things have changed now, he adds.

“I’m feeling much better. The E-library has helped with my studies.

“We can see the periodic table of science, and also maps and other geography things in a pictorial way that is easy to understand. It’s not only that – we can also play games and have fun.”

Kamal says his parents were very excited when he told them about the computer and came to watch the very next day.

It was not only Kamal. His computer teacher, Shankar Prajapati, says all the pupils were afraid.

“They all worried they would catch some virus and fall ill or even die. But now they are familiar with computers,” he says.

“Even we teachers are gaining knowledge from the E-library. It’s really helpful for us, too.

“The students can see science experiments carried out on screen and search for whatever they want in the encyclopaedia.”

E-libraries use audio, video and text technology. Their digital “books” cover various topics of the school syllabus, ranging from social science to literature and from mathematics to science.

The E-library concept was initiated by Help Nepal Network (HeNN), a non-governmental organisation.

Its goals are to provide literacy and awareness about the use of computer and information technology, and to set up one E-library in each of Nepal’s 75 districts, which range from the high Himalayas to the hot plains.

Much of the country is remote and accessible only on foot, and many of its people have never glimpsed a computer, let alone touched one.

Working with other organisations, including Save the Children-Norway, HeNN is setting up the libraries with the use of what is called the Linux Terminal Server Project (LTSP).

This is a free and open-source (accessible to everyone) package which connects one powerful central server in the school, using the Linux operating system, to a number of diskless low-end computers. When linked to the server, each computer receives a full Linux desktop.

LTSP is seen as a cost-effective, power-saving and durable technology, not only in schools but also in other sectors. What’s more, it is also virtually free of tampering and computer viruses – and the Linux software developed by Madan Puraskar Pustakalaya, a charitable educational library based in Kathmandu, is being provided free of cost.

And its appeal is growing. In front of the little shops on the rough village streets, men gather to play cards and drink tea. But even they have developed a fascination for the computer. So the school has arranged some computer classes for them, too.

“It’s really useful for us to get to know about this technology which we didn’t see when we were younger,” says Sahakul Puri, a 35-year-old farmer.

“Getting to learn and know about it is a great opportunity for our children. I can’t afford to send my child to computer classes an hour’s drive from here. So we’re grateful for this project.”

Of the books scanned in the E-library, one of the most popular among the villagers is called “where there is no doctor”.

It is like a first-aid manual, giving the information necessary for the treatment of wounds or illnesses – including traditional remedies such as chewing burnt ginger or brewing ginger soup with honey for a cough.

The school has even attracted lots of villagers to its campaign known as “Leave Your Playing Cards – Learn Computers”.

I also visited a much more remote school where the E-library project has just been set up. Villagers and students carried the computers up and down the steep hills and valleys to the Shree Koldung Devi secondary school, nearly two hours’ walk from the main road.

Before this, anyone wanting access to computers or sizeable shops would have to walk two hours and drive two more, so the system has proved highly significant for local pupils. Most of the places where E-libraries have been set up so far are in the hills.

Sudarshan Shrestha, information and marketing director for Save the Children-Norway, says the system has been very helpful but notes that there are challenges.

He says students tend to get only about two hours’ access per week “because there are not more than 10 computers for several hundred students”.

For the library, Save The Children-Norway has developed awareness materials on subjects such as children’s rights and child abuses.

“I believe this information and communication technology project is essential. It may not be a basic requirement, but it’s a tool to uplift the health and education sectors. And we’re taking it forward. I hope we’ll be able to cover all 75 districts some day.”

So far it has reached six.