One District, One eLibrary Campaign 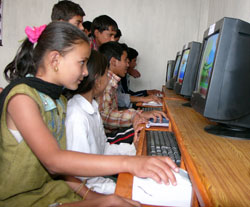 One District, One eLibrary Campaign

E-library or electronic library is an ambitious and innovative project launched by Help Nepal Network to offer computer facilities for the benefit of students and communities in all 75 districts of the country.

The Network has already set up fifteen e-libraries in various districts and is in the process of setting up more in association with various organisations. The initiative has attracted tremendous response. Earlier this year, Save the Children-Norway, asked us to set up an e-library and we also worked with Nepal Library Foundation, Canada, to set up another e-library.

The Project aims to install low-cost, high-impact computer facilities in schools and rural centers. Based on an innovative model that uses a single networked server to run multiple computer stations, the Help Nepal e-library can be deployed at one-fourth the cost of a traditional computer lab. The computers run on a Linux platform that is secure, stable and require low-maintenance. Moreover, the use of open source software makes future upgrades free of cost.

This low-cost, low-maintenance model is highly suitable for rural Nepal. But most importantly, for the first time in their lives, the Help Nepal e-Library will allow beneficiaries to leverage modern information and communication technology (ICT) to enhance learning, build computer skills and narrow the digital divide.

Help Nepal has already established two e-libraries, in Dang and Bhaktapur, and two new e-libraries will soon be set up in Kavre and Morang districts. The next six districts targeted are: Banke, Bhojpur, Chitwan, Sunsari, Rautahat, and Rupandehi. Each e-library will cost approximately US$2,800 and thus the total Project cost for six districts is estimated at US$16,800.

HeNN’s e-library campaign was also featured in the BBC (http://news.bbc.co.uk/2/hi/uk_news/education/7684616.stm). Below is another article by a local magazine:

Making a Difference: How e-library has helped

Shyam Krishna Dangol (16), a grade 10 student in Shri Saraswati Secondary School, Thakalmath, a small village on the eastern ridges of the Kathmandu Valley, is elated to have six new computers in his school. Within a few hours of spending time on a computer he has realised that a computer can be a good companion for learning. “I can now literally see the demonstrations of science experiments, refer the Encyclopaedia or even play games,” said Shyam.

In the face of rapidly changing technological advancement and the exorbitant cost of proprietary hardware and software solutions, which had stymied Nepal in attempting to participate in ICT for development, the use for Free and Open Source Software (FOSS) is emerging as a solution. There is a global trend toward FOSS solutions, which has become viable, cost effective and suitable options for countries like Nepal in ICT for development. “FOSS has challenged our preconceptions on how software is produced and distributed”, Roshendra Dhoj Khadga, executive board member, Help Nepal Network – Nepal said, adding, “Linux Terminal Server Project (LTSP) can be a low cost solution for deprived communities who cannot afford a bigger volume financial expense.

In association with FOSS community of Institute of Engineering (IOE), HeNN has so far set up two e-libraries, one in Thakalmath and another in Dang Deukhuri under its project ‘One e-Library per District’.

LTSP, a system that works with only one central high end server and other diskless low-end thin client computers, allows to run Linux on a server, and then use thin clients (almost any computer will do) to connect to the server and receive a full-blown Linux desktop. “It works by ¬deploying LTSP on a high-end server with Linux, take a very low end PC, remove hard disk, CDROM and Floppy Drive and add a bootable network card and you have a full fledged PC ready to work on”, explains Shishir Jha, an engineering student of IOE and a volunteer with the e-library project.

“Had it been chosen to deploy normal system with 10 computers it would have cost around NRs 300,000, LTSP slashed hardware cost by 40% and if we consider software and maintenance, the cost goes down by 75%,” explains Bhaskar Prasad Rimal, Software Developer of Bhasha Sanchar, a project under Madan Puraskar Pustakalaya, who envisages to implement similar project in schools in Dailekh, Myagdi, Dhading and Lalitpur.

Nepal’s ICT infrastructure is sparse with no substantial development in the rural areas. The fact that a majority of the Nepali population lives in the rural areas makes the situation look gloomy and just having the most efficient and effective software isn’t enough, necessary infrastructure and hardware for the vital applications is essential as well. It is necessary that a proper ICT infrastructure must exist before any meaningful usage is achieved and only then the deployment of LTSP can be one of the solutions.