MaHa tour the US in Support of HeNN

Home / News / MaHa tour the US in Support of HeNN 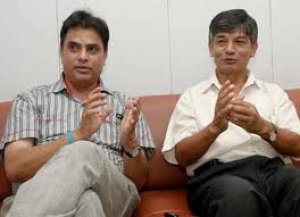 MaHa tour the US in Support of HeNN

MaHa captivated the Nepali audience in the US with prahasans “Abhinandan” and “Sharaddha.” The viewers described the program as very sophisticated and relevant to the current situation in Nepal.

After each show, the audience lined up for autographs and photo opportunities with the superstars. Many were touched by documentary “HeNN in Action” that preceded the show.

The documentary highlighted HeNN’s missions and achievements and the cumulative power of small donations collected from Nepalese diasporas around the world. MaHa also praised Help Nepal Network for helping the needy people in Nepal and appealed the audience to do the same by contributing at least a dollar a month. Hari Bamsha appealed to the audience –

HeNN would like to extend our gratitude to MaHa Sanchar for helping in our efforts to raise funds for a 13-bed health post in Haripurwa VDC in Sarlahi and to promote Help Nepal Network in the US. The tour raised a net amount of $25,447.44 after expenses. Out of this, $14, 686.49 was paid to MaHa Sanchar and the artists; and $10,760.90 was set aside for the health post.

Special thanks to HeNN-USA members Prerana Shrestha (New York) and Navin Dhakal (Baltimore) for their leadership in organizing the events at their respective cities.