How They Mixed Sport With Charity in London, Kathmandu Post

Home / News / How They Mixed Sport With Charity in London, Kathmandu Post 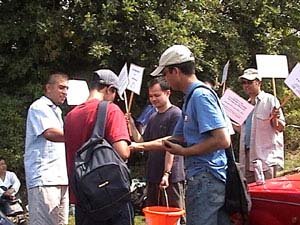 How They Mixed Sport With Charity in London, Kathmandu Post

LONDON, July 29, 2002:
The members of the Nepalese community in London responded to the call to help the flood and landslide-affected people of Khotang by organising a game of football at the Brainsite High School playing ground. There were nearly 40 teams of Nepalese people playing football on the ground. The scene cut a beautiful picture indeed.

Carrying a placard which read ” Even a penny matters,” they were successful in collecting the amount of about Rs.75 thousand equivalent to 603 sterling pound. A penny is equivalent to nearly Rs.1.24.

The event was organised by an association called Yeti while the job of actual collection of the fund was done by ” Help Nepal Network”. The task of collecting the money was actively participated by women and youth. Help Nepal Network is, meanwhile, involved in garnering fund at the speed of “one Pound a month” for school libraries and school buildings back home by approaching Nepalese settled in England and others who want to contribute to the cause.

The response was overwhelmingly appreciative than we had anticipated. Nepalese were found more positive although we had issued the call at short notice,” said Madhusudan Kayastha who works at Goldman Sachs as a system associate. He is also associated with the Help Nepal Network.

HeNN has supplemented to the amount and are sending nearly Rs.150 thousand to Nepal which will be used for providing relief material to the affected people.

Yeti is one of the oldest organisations of the Nepalese residing in London, although there are many others too working along casteist and professional lines. Nima Lama, Vice Chairman of the Yeti said, ” We attract a lot of Nepalese. There are nearly 10 thousand Nepalese working in London. Add to it nearly six thousand Gorkhas and their family members.

He also said that children get to learn about the Nepalese culture whenever some events are organised. This was evident in the way the families and children had turned up at the football ground. All of whom could be seen having something or the other in keeping with the Nepalese food habits. Food too was Nepalese.

Although the Yeti does not accept the membership of non-Nepalese, there are Nepalese of Bhutanese and Sikkimese origin as members of Yeti. The Cultural Secretary of Yeti, Ananda Kumar Gurung, said Nepalese children are treated with Tamang cello and folk songs so that they remain acquainted with the Nepalese ethnic culture. 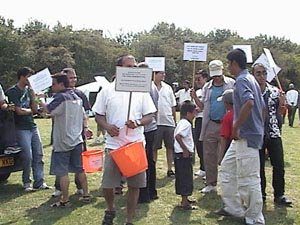 Yeti was set up by the Nepalese students studying in London in 1960s. In fact it was established under the leadership of Pashupati Shumshere Rana. He was its first president. ” Nepalese who were involved in catering service were people who extended utmost support to Yeti, ” he said. There are nearly 60-70 Nepalese restaurants in Britain, with 40 of them in London.

Although the Nepalese used to congregate during the birthday celebrations of His Majesty the King or other festivals, the football event drew appreciable crowd. The Sports Secretary of Yeti, Amrit Thapa, said, ” There were more teams vying to register. But we denied once we had 40 of them.”

Out of them, 14 teams belonged to the British Gorkhas. Although it was Civilian Monal-7 which won the match in 1999, it is invariably the Gorkha team which comes out victorious. The games began at 9am but the final match had to be played well after the darkness had set in. The winner of the matches was STS Gorkha while the runner up was Raiding Boys.