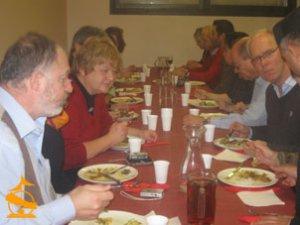 Expatriate Nepalese living in Sweden, local Swedish nationals as well as friends of Nepal from different countries working in Stockholm took part in the event. Nepali three-course meal was served on the occasion. Pakauda, Momo and Nepali Dal Bhat were main attractions of the food festival.

Shailesh Upadhyaya, Vice president of HeNN- Sweden Chapter, made a short presentation about Nepali food and culture on the occasion while president of HeNN Sweden, Brijesh Mainali, spoke about HeNN’s objectives and achievements so far.

The programme was followed by a video documentary showing Nepal’s natural and cultural heritage.

Over 8,300 Swedish Kroner was raised through the event. Some well-wishers of HeNN-Sweden, who could not participate in the event, had also made contributions to the event.

“The money will soon be sent to the HeNN-basket fund,” said Mainali.

“We plan to organise similar events in future so as to promote Nepali food and culture in Sweden at the same time raising funds for a number of charitable causes,” he added.