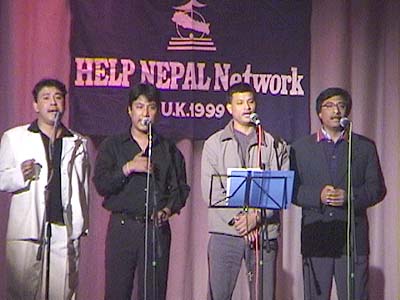 Some of Nepal’s top pop artistes donated half the proceeds, nearly $1,800, from a Nepali music concert in London on 23 February, 2003 for HELP NEPAL Network, a charity started by Nepalis living abroad.

Sapan Kumar Rai and Situ Kharel, Nepali singers who are based in London, also performed.

The manager of the event, Raju Tuladhar, said the Nepali community in the UK was very supportive.

HELP NEPAL Network encourages Nepalis around the world to give back to their country.

It operates in 10 countries and has donated over £22,000 towards building schools and libraries in remote districts like Dolpa, Dang, Pyuthan and Parbat. It has also organised several health camps in Chitwan and Kathmandu.