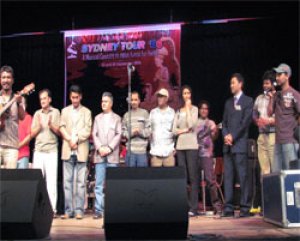 From Australia itself, Sarun Tamrakar and Dheeraj Shrestha were involved in the team.

Over three nights in Melbourne and Sydney over two weekends, over a thousand people swayed to the beat of contemporary Nepali music, folk songs and fusion music.

The foot-stomping dances drew people of all ages to the dance floor. It was truly an entertainment of the highest quality. The tabla recital by Dheeraj Shrestha drew praises from many. Momo, alu achar, khasi ko masu and chiura completed a memorable night-out for many.

The tour was a great success. It generated funds for future HeNN activities. It made people aware of HeNN. It was a celebration of Nepali music. It brought the Nepalese community together for a great cause.

Every person who participated in this endeavour with us will make a difference to the lives of many needy people in a one of the world’s poorest country.

Background to the tour

The month of September marks a very important day in the HeNN calendar. On a day convenient to HeNN chapters around the world a particular day is earmarked to raise funds for the HeNN’s many charity projects and is know as HELP NEPAL International Day.

Buoyed by the overwhelming successful fund-raising event of 2005, the 2006 fund-raising activity aimed to be bigger and better. An idea that cropped up during a casual conversation at a small gathering has become a reality and a great success.

The idea was to invite top ten contemporary Nepalese artistes and musicians for live concerts in Melbourne and Sydney. The sheer logistics in organising a tour of this magnitude and complexity were a great challenge to the mere four HeNN Sydney Chapter executives but the prevailing attitude was “If we try and seek help from the community, we can pull it off.”

It was still a very risky idea for a network that does not have its own resources and the success depended entirely upon the external factors on which we had very little influence. A low turnout was always very probable.

However, such an event would provide benefits at many levels: exposure and branding of the HeNN organization; fund raising for its activities; opportunity for Nepalese artists to travel and exhibit their talent; and, lastly and equally importantly, it provides a fun-filled evening for Nepalese community settled overseas.

It was to us an experience, a challenge and a journey to achieve the above outcome. A favourable outcome would serve as a fund-raising model that could be repeated all over the world.

Many valuable lessons have also been learnt. We gained valuable insights into mobilising the greater Nepalese community with different agendas, organising a live music concert and fulfilling statutory processes for visa processing.

We also found that there we were naïve to expect the full support and participation from everyone. Our greatest disappointment was the lower than expected turnout. There will always be sceptics who will choose not to participate but this is more than adequately offset by the many enthusiastic supporters.

Our success is a measure of our earlier stated objectives. Foremost among our achievement we feel is the composition of a theme song for HeNN. It is a work in progress. When completed it will be audio-visual composition reflecting HeNN’s objectives and projects which will be a powerful medium for our promotion. 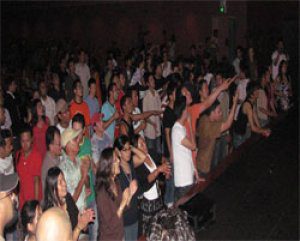