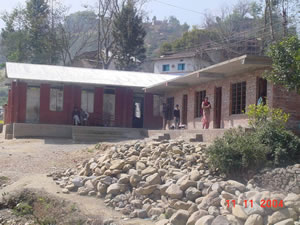 PROJECT DESCRIPTION:
Shree Buddha Lower Secondary School was established in 1960 with four rooms. The school building was built with mud and stone. Altogether there were 395 students studying from grade 1 to 5.

Congested classrooms, floods during rainy season, polluted environment and bank of the river used as a ‘ghat’ (cremation centre) were the major problems of the school.

HeNN didn’t only help to re-build the school but also helped in procurement of land from the government. The new piece of land meant that the school could be built on higher ground away from a nearby river and cremation ground.

During the construction, an Australian volunteer, Simon Bond, helped for two months teaching English in the school. He was welcomed by the community and given accommodation by the School Principal.

The School Principal says, “the new building has released the students from a cave like suffocating classes into a fresh and healthy environment.”