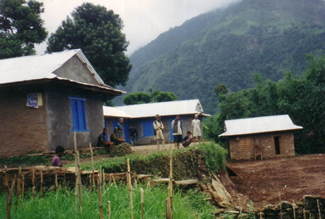 PROJECT DESCRIPTION:
Renuka Lower Secondary School rooms in Dipsung VDC of Khotang district were completely destroyed by the heavy landslide on 14th July 2002. The school virtually closed because of the landslide.

Khotang Sewa Samaj, a local charitable group, had raised several thousand dollars, to which HeNN had also contributed nearly US$2,000 to support the flood and landslide victims.

With part of the money raised, the Samaj reconstructed classrooms which were destroyed by the landslide. As they didn’t have enough money to construct the roof, they approached HeNN for support. HeNN provided US$1,140 to the school, which helped them to complete the reconstruction of the classrooms.

Mr. Kuber Budhathoki, Principal of the school, says, “The financial contribution made by HeNN came at a time when we desperately needed some extra support. The support helped us to re-run the school smoothly. We sincerely appreciate HeNN’s effort to support us.”